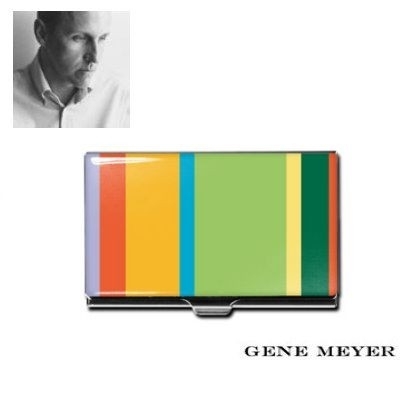 After graduating from Parson's School of Design, GENE MEYER worked for Donna Karan at Anne Klein Studio designing accessories. He then became Geoffery Beene's design assistant, working closely with Mr. Beene for over ten years. While at Beene, he designed women's ready to wear as well as women's shoes. Gene started his own women's made to order clothing business in 1989, and then branched out into women's accessories. He added men's neckwear to the mix in 1991. His neckwear earned him his first CFDA award (American Fashion Award) in 1994. By 1994, Gene was designing a complete menswear collection under his own label. In 1996 Gene received his second CFDA award for his menswear collection. Currently, Gene is developing his home licensing area which will include textiles, table settings, bed, bath, and beyond. Gene is also working with ACME Studios on a line of pens, watches and card cases.